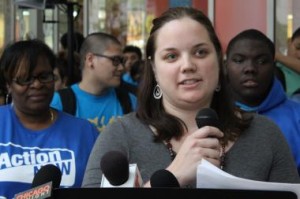 Jessica Schneider remembers her first day as a PILI Intern at MALDEF in 2009 very well: it was the day that MALDEF’s Executive Director was interviewed on TV about the nomination of Sonia Sotomayor to the United States Supreme Court. “One of the other interns was in a ‘walking shot’ that appeared later on the local news,” Jessica recalls. “It was pretty exciting for us.” Now a staff attorney at the Chicago Lawyers Committee for Civil Rights Under Law, Jessica has had several much closer encounters with the news media lately, in English and in Spanish, both for her work on educational equity and other issues in Chicago, and for her volunteer work with Legal Prep Charter Academy.

On that first day of her PILI Internship at MALDEF, Jessica worked on translating the press release about soon-to-be Justice Sotomayor into Spanish, and throughout her Internship she worked on a wide range of issues affecting the Latino community, like funding for bilingual education, redistricting and voting rights, and immigration. She was able to learn about things she hadn’t been taught in law school, like how to address the civil rights issues of a minority population. On the practical side, Jessica was able to expand her legal Spanish-language skills, and gain experience interviewing clients and analyzing issues. She also a got to see how a public interest law office works and build connections with others doing the kind of work she aspired to do in the future. “I’d spent my 1L summer in Chiapas, Mexico, as part of a program through DePaul University College of Law,” Jessica explains. “I wanted to use that experience to make connections to the public interest law world in Chicago. My PILI internship did just that.” Most importantly, says Jessica, “I learned how to be a compassionate attorney working to address those issues that affect so many in our society.”

Jessica graduated from DePaul in 2010 and received a Chancellor’s Award of Service for her volunteer work while in law school. After graduation she continued volunteering, both with CARPLS on their hotline, and with the Chicago Lawyers’ Committee for Civil Rights before being offered a job as a staff attorney there. She currently works with their Fair Housing Project and their Educational Equity Project. “Both my areas of work – fair housing and educational equity – were things I had little experience with in law school,” Jessica says. “PILI provided valuable financial support for someone like me who otherwise wasn’t going to be paid to do an internship but really wanted to get some public interest experience.”Jessica also runs the Chicago Lawyers’ Committee’s internship program, and, using PILI’s summer programs for Interns & Fellows as a model, she organizes brown bag lunches and events for their interns.

For Jessica, staying connected to PILI is an important part of her ongoing career development. She is actively involved in PILI’s Alumni Network, serving on the PILI Alumni Network Leadership Council and attending or even speaking at PILI programs and events. She also serves as a mentor to current PILI Interns through PILI’s advising program. Working as a public interest lawyer has been Jessica’s goal since before she even started law school. She now feels fortunate to be able to do the work she does, and to be a part of Chicago’s deeply-rooted public interest community.