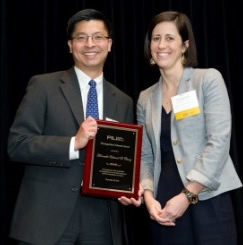 In December 2010, the Senate unanimously confirmed Edmond Chang as a United States District Judge for the Northern District of Illinois. Judge Chang began service on the court in early January 2011, and was at that time the youngest federal judge in the nation. He is the first Asian-Pacific American Article III federal judge in Illinois and in any of the states in the Seventh Circuit. Judge Chang’s parents emigrated from Taiwan to the United States in the 1960s.

Judge Chang had previously been an Assistant United States Attorney in Chicago, starting in 1999. After prosecuting a wide variety of federal offenses, including complex fraud, child exploitation, and drug trafficking crimes, he was promoted to Deputy Chief of the General Crimes Section in 2004, and in 2005, he was selected to serve as the Chief of Appeals of the criminal division. In this role, he supervised the United States Attorney Office’s brief-writing and oral argument in the Seventh Circuit in approximately 350 appeals, and personally handled over 30 appeals. He also provided legal and litigation advice to the entire Office on any issue that might arise on appeal, including in the most complex public corruption and fraud prosecutions brought by the Office. In November 2008, the Chicago Crime Commission awarded him the Task Force Investigation & Prosecution Award for obtaining the convictions of 45 defendants in dismantling an international drug-trafficking organization.
Before joining the Office, Judge Chang practiced employment and labor law at Sidley Austin. His pro bono work there included representing a habeas petitioner and drafting employee policies for a non-profit community organization. Prior to this, Judge Chang served two federal judicial clerkships: first, for Judge James L. Ryan of the U.S. Court of Appeals for the Sixth Circuit, and second, for then-Chief Judge Marvin E. Aspen of the Northern District of Illinois.

Since 1996, Judge Chang has taught Civil Rights Litigation as an Adjunct Professor of Law at Northwestern University School of Law, focusing on constitutional-rights violations. Judge Chang earned his law degree with honors from Northwestern, where he served on the Northwestern University Law Review and was awarded Order of the Coif. During law school, he externed at the Chicago Lawyers’ Committee for Civil Rights Under Law, and after graduating from law school, he was a PILI Fellow sponsored by Sidley Austin at Chicago-Kent College of Law’s legal clinic, where he worked primarily on criminal defense matters. Before law school, he earned with honors a Bachelor’s of Science in Aerospace Engineering from the University of Michigan-Ann Arbor.