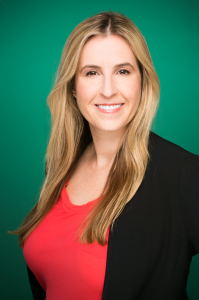 Kristen Hudson is a commercial litigation attorney who began her legal career in 2003 as a PILI Graduate Fellow at Chicago Volunteer Legal Services (CVLS). Since then, she has stayed involved with CVLS as a volunteer and board member, recently finishing her term as Board President.

“I credit CVLS with making me the lawyer that I am today,” said Kristen. “The hands-on experience I received early prepared me for the challenges of a career in commercial litigation, and gave me the foundation I needed to begin my legal practice.”

Prior to attending law school, Kristen taught high school Drama and French. She then attended The John Marshall Law School.  Kristen was a summer associate at Altheimer & Grey before its dissolution in 2003, and Altheimer sponsored her Fellowship.

“If I had not been a PILI Fellow with CVLS, I would not have been ready to hit the ground running with my legal practice,” said Kristen. “I know my way around the Daley Center, I know how to file documents in every division, and I know how the Sherriff’s office works.  That is not the kind of behind-the-scenes access or training that I would have received in a law firm.”

Kristen also found the work she did as a Graduate Fellow extremely rewarding, and her clients left a lasting impact. One of her most memorable Fellowship cases was when she helped a couple adopt their eight grandchildren, whom they had been taking care of since the children’s mother had passed away. “As a PILI Fellow at CVLS, I was able to help a number of people get the life-changing legal services they needed,” said Kristen.

Kristen is now a principal and General Counsel at Chuhak & Tecson, P.C. She continues to volunteer with CVLS and is also co-chair of the Coalition of Women’s Initiative in Law’s Community Outreach Committee.

Earlier this year, Kristen was honored with the Chicago Bar Association Alliance for Women 2016 Alta May Hulett Award, which acknowledges one outstanding woman lawyer who has significantly contributed to the advancement of women in the legal profession or other areas, and whose career exemplifies the highest level of professional achievement, ethics and excellence. In 2014, Kristen was named one of “40 Illinois Attorneys Under Forty to Watch” by Law Bulletin Publishing Company. She has also has been selected as an Emerging Lawyer, a distinction earned by fewer than two percent of all Illinois attorneys under 40 years old, and Super Lawyers magazine has honored her as an “Illinois Rising Star” for eight consecutive years.

“My experience as a PILI Fellow has created my lasting belief that lawyers have the responsibility and duty to provide pro bono legal services to support the community’s needs,” said Kristen. “PILI and CVLS taught me how important it is as a lawyer to give back.”