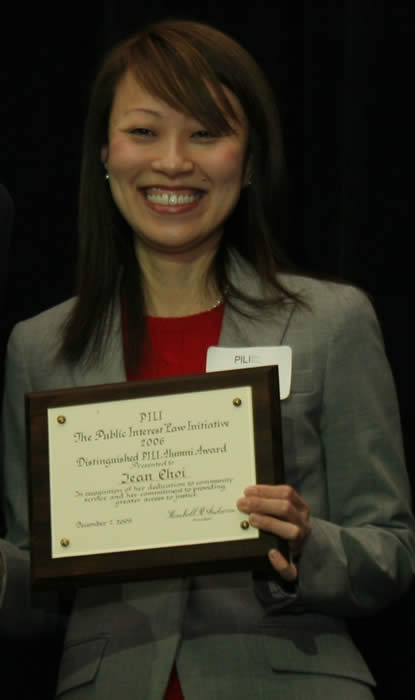 Twenty years ago in the summer of 1992, Jean Choi, then a rising 2L at Loyola University Chicago School of Law, began her PILI Internship at the Chicago Lawyers’ Committee for Civil Rights Under Law. It was an experience that impacted her life in more ways than she could have anticipated. PILI has been placing Interns at the Chicago Lawyer’s Committee since our founding 35 years ago. The agency works on a broad range of legal issues related to social justice, and Jean’s work in the summer of 1992 was accordingly diverse and extensive. “It was my first real experience working as a lawyer,” says Jean. “I got to work with actual clients – for me it was very exciting.” Many of the clients with whom Jean worked were victims of employment discrimination. Others clients came through the Lawyers’ Committee’s Fair Housing Project, which Jean worked on with Betsy Schuman-Moore, a 1981 PILI Intern Alum who still supervises PILI Interns at the Lawyers’ Committee today. Jean also worked with Maria Woltjen, a 1987 PILI Fellow Alum, on juvenile justice issues related to transfer hearings. At the time of Jean’s Internship, the Chicago Lawyers’ Committee’s Executive Director was Roslyn Lieb; Roz would later go on to become the Executive Director of PILI until her retirement in 2004.

In addition to her employment, housing, and juvenile justice work, much of Jean’s focus during her Internship was on hate crime policy, particularly with Asian communities in Chicago. “In 1992, hate crime laws were fairly new,” explains Jean. Having grown up in Chicago herself in a Korean family on the northwest side, Jean recounts how things had been different in the 1970s. “My family was a victim of hate crimes, and my community ,” she says. “Our windows were broken, our church was vandalized. We called the police and they said there was nothing they could do.” But the 1980s brought greater awareness of hate crimes and better laws, as well as better resources for victims. Jean’s PILI Internship gave her the chance to support communities in ways her own community had been ignored when she was a child. “I was able to do workshops at Asian community service centers across the city,” says Jean. She worked with Vietnamese and Korean communities on the north side, and on the south side with newly expanding Chinese communities. “We would talk to them about how the laws protected them and about what they could do if someone they knew was the victim of a hate crime.”

Jean’s experience as a PILI Intern left her wanting more. During her third year of law school, she got a placement clerking for the Deputy Commissioner of the Chicago Commission on Human Relations, where she worked again on housing and employment discrimination issues. Following this, Jean worked for the Chicago Board of Education’s Law Department, where she gained experience not only in school reform law, but in immigration issues as well. Since 2003, Jean has been working in business immigration law, and she now manages her own firm helping corporations, universities, hospitals and other employers lawfully employ non-US citizens and permanent residents.

And, Jean’s experience as a PILI taught her that pro bono legal work is a high priority in her life. “The Chicago Lawyers’ Committee opened my eyes that I could be an advocate in so many ways, that I could change the landscape of the law,” says Jean. “You do not have to be passive when you see something is unjust, you can be an advocate for change in a meaningful way.  It just clicked with me.” Professionally, Jean is a member of the American Immigration Lawyers Association, the Illinois State Bar Association, the Chicago Bar Association, the Korean American Bar Association, and the Asian American Bar Association. With her school reform experience, Jean co-founded Passages Charter School in Edgewater on the north side. She has also served on the Chicago Advisory Board of “Facing History and Ourselves,” a worldwide organization to combat racism and nurture democracy. Jean got involved with this nonprofit through her continued friendship with Maria Woltjen, then former colleague and fellow PILI alum from the Chicago Lawyers’ Committee. In 2006, Jean received a Distinguished Alumni Award from PILI at our Annual Awards Luncheon.

As it turns out, Maria is not the only former colleague from her time as a PILI with whom Jean still keeps in touch. Jean was one of five PILI Interns and Fellows at the Chicago Lawyers’ Committee in 1992, and one of the other PILI Interns, Peter, a rising 2L at Harvard Law School, also caught Jean’s attention. The two stayed in touch throughout their remaining years at separate law schools and, a few years after graduating, they got married. “Roz came to our wedding!” says Jean, laughing. “During that summer of our PILI Internship, we had such an interesting and good group of people. We all worked together and learned from what the other interns and attorneys were doing.”